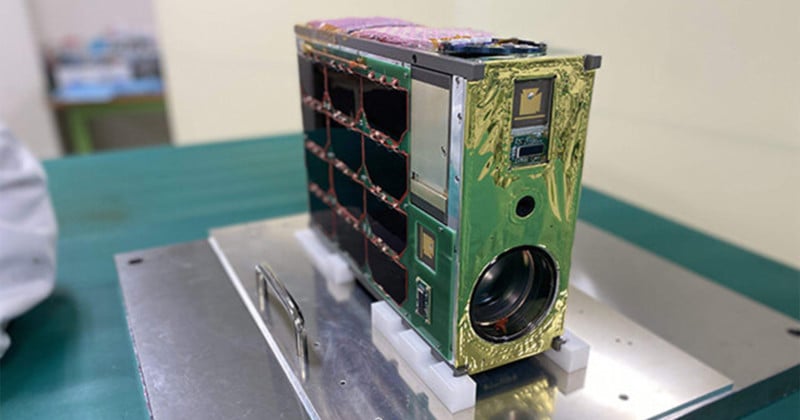 Ricoh Japan has announced that its Pentax DA* 300mm f/4 ED (IF) SDM lens has been installed on Japan’s Kitsune 6U Microsatellite and has been sent into space.

The Kitsune 6U was launched into space on a February 20, 2022 mission aboard the Antares rocket. It successfully docked with the International Space Station (ISS) and will soon be released into orbit. The microsatellite is relatively small and measures approximately 10cm x 20cm x 30cm. It will be a part of multiple demonstration experiments including collecting ground sensor data and high-resolution images of Earth.

Once the satellite is released, it will begin photographing the Earth’s surface with a resolution of 5m, meaning that each pixel of an image taken by the system will cover a 5-meter by 5-meter square area.

Since the Kitsune 6U — which was developed by HAK Consortium and Kyushu Institute of Technology, with Harada Seiki Co., Ltd. — is rather small, the single-camera lens had to be customized to fit and work in the satellite properly.

“This satellite is intended for entertainment and academic use. When it came to making satellites that were easy to use and cheap, it was necessary to adapt them to space equipment using consumer products,” Hirotoshi Harada, President and CEO of Harada Seiki Co. Ltd, says. “Only with joint research with Ricoh Imaging, the Kitsune satellite could take a step forward in the field of new artificial satellites.”

The Selection of the Pentax Lens

The Pentax lens was supposedly chosen for this project due to its “resolving performance” and the fact that its construction, which is all metal, is suitable for use in space. Additional reasons that have been provided for its selection are are its compact size and affordability.

“The artificial satellites that are needed now are those that are easy to use and have low hurdles to use,” Harada says.

“If there is an artificial satellite that many people can feel free to use with a sense of play, the use will increase. By doing so, we can think that we can contribute to the information industry that is closer to people’s lives. Like Ricoh Imaging, who cooperated with us this time, Harada Seiki will contribute to the world so that people will be happy.”

It is not clear when the public can expect to see images taken with the Kitsune system and Pentax lens, but Ricoh is bound to share some of them, perhaps on the astrophotography section of its website.