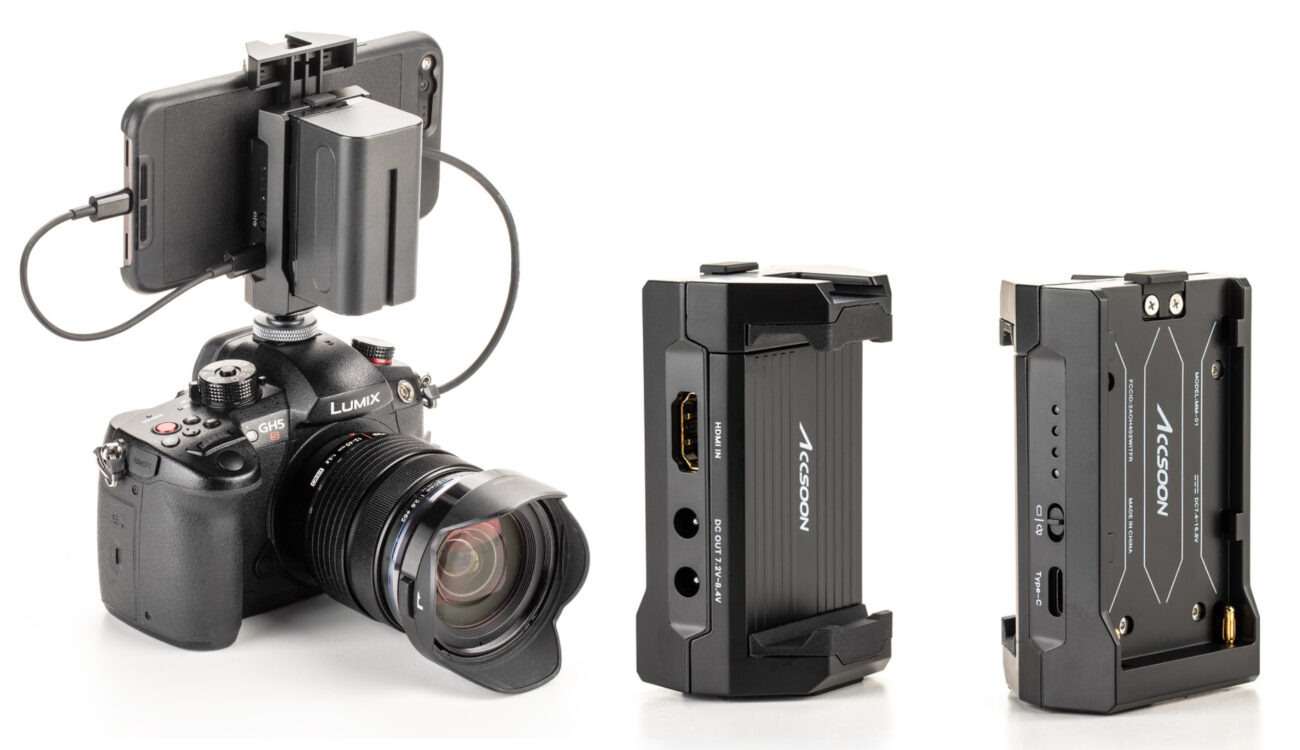 We’ve already reported about this new adapter, but now it’s time to bring it to the market: The Accsoon M1 HDMI to USB-C adapter is a handy tool that not only turns almost any Android phone into a proper on-camera monitor, but also powers that very phone and even the host camera via an NP-F battery.

When Accsoon first announced its new M1 adapter in September 2021, it looked promising, but there was no indication of when this handy device would hit the shelves. Well, the wait seems to be over, as the Accsoon M1 is now officially available.

In short, the Accsoon M1 is a phone holder that takes an HDMI signal as input, converts it to meet certain specifications, and then outputs the signal via USB-C, which can then be fed into any Android phone running Android 8 or higher. In addition, the M1 also houses an NP-F battery that can power both the phone and the host camera via two dedicated 7.2-8.4V outputs on the M1.

Finally, the M1 even has a handy cold shoe adapter on the top. To attach the unit to your camera, there is a standard 1/4-20 thread on the bottom.

There’s an app for that

To make proper use of the connected Android phone, you need to use an app called Accsoon SEE. With it, users can not only monitor the live video from the camera, but also use professional tools like false colors, zebras, histogram, waveform, LUT support, focus peaking, and guides, to name a few.

The clamping mechanism of the M1 supports phones with a width between 65 mm and 90 mm. This means that most Android phones should fit very well, often in their (perhaps slim) protective cases.

If you are seeking the lightest camera package possible, you can also leave the NP-F slot empty and power the camera internally while the phone uses its own battery. The M1 adapter will also work without an NP-F battery connected.

Another nice feature is the ability to stream the live feed directly to a cloud-based video service like YouTube or Twitch using the phone’s internet uplink. This saves a lot of money and bulk, as such solutions are usually not as slim as the Accsoon M1 with the phone connected. Another feature is the ability to record the incoming video stream as HD proxy files directly on the phone for easy sharing, for example.

According to Accsoon, features of the M1 include:

The M1 weighs only 75g, which is pretty cool since all you need for a complete kit is the camera, the 75g M1 and your phone.

The Accsoon M1 costs $99 and will be available very soon. All in all, I think this is a pretty clever device since we all have a phone in our pocket anyway. Of course, it can’t replace a proper monitor, but there are certainly good use cases for the M1.

One concern, though, is of course the fact that your phone now acts as a monitor. So what if someone calls in the middle of a live session? You can’t put it in airplane mode while you’re streaming, right?

What do you think of it? Would this be a useful addition to your workflow? Share your experience in the comments below!