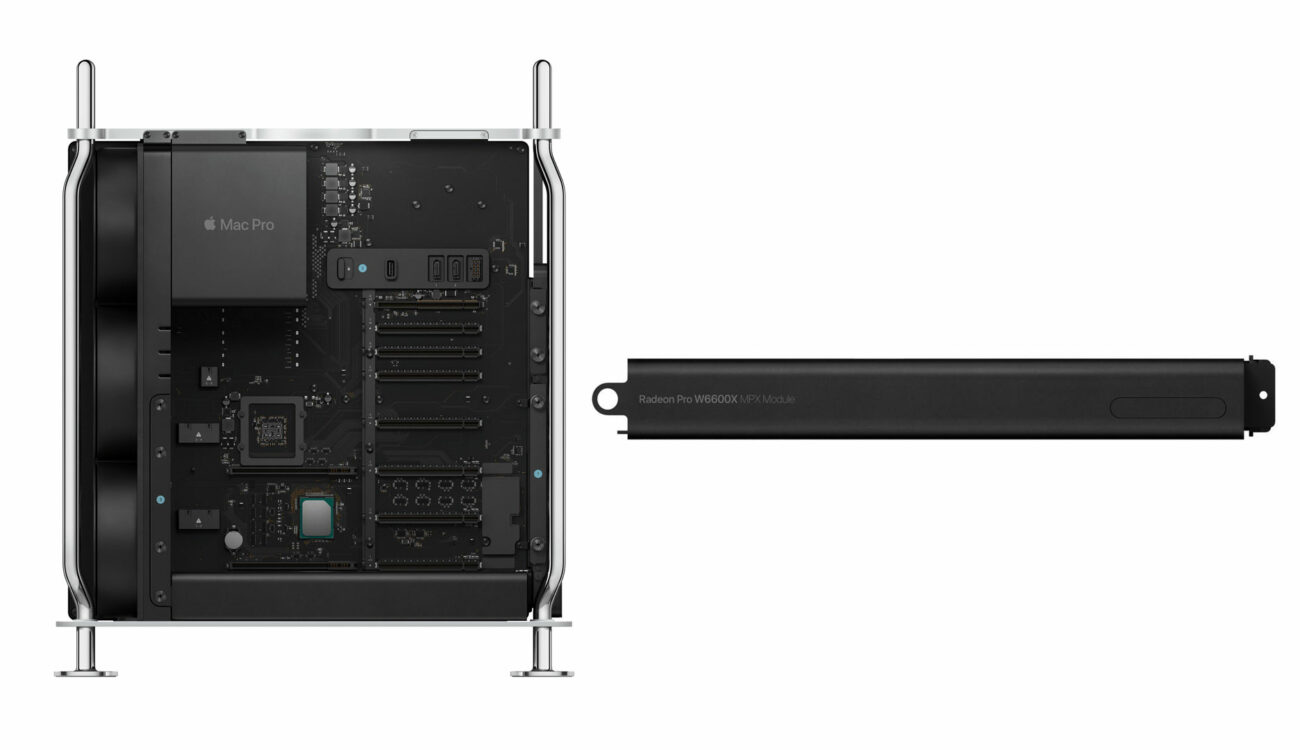 Apple quietly added a new GPU option for the Mac Pro: the AMD Radeon PRO W6600X. This graphic card, which is available as an MPX module, is based on the AMD RDNA 2 architecture and boasts 8GB of GDDR6 memory. Also, the “entry-level” Mac Pro now comes with a standard 512GB SSD instead of 256GB, and the Radeon PRO 580X has been replaced by the AMD Radeon PRO W5500X. Let’s take a closer look at these upgrades!

This GPU option is the less powerful but most affordable GPU of the AMD Radeon PRO W6000 series. Indeed, some models that were introduced last year, such as the W6800X and W6900X, have stellar performances, but your pockets must be as deep as your needs to go with such a model.

The AMD Radeon PRO W6600X is a half-height MPX module. As part of the W6000 series, it is based on AMD’s latest RDNA2 architecture.

At the back of the card, you’ll find two HDMI and two DisplayPort connections. It means that the AMD Radeon PRO can support up to ports four 4K displays, one 5K display, or two Pro Display XDRs.

Interestingly, this MPX module requires macOS Monterey 12.3 or later and is not compatible with Big Sur or even Catalina.

Apple also beefed up its base Mac Pro model specifications. The high-end computer now comes with standard 512GB of SSD storage instead of 256GB. Also, the aging Radeon Pro 580X MPX module has been replaced by the W5500X.

The AMD Radeon Pro W6600X is available now. The upgrade inside the mac Pro configurator is $300, and it retails for $700 if you purchase it later. The base model of the Mac Pro still starts at $5.999.

What do you think about this new GPU option for the Mac Pro? Are you considering an update to the new Mac Studio or would you rather wait for an Apple Silicon Mac Pro? Don’t hesitate to let us know in the comments down below!

How to get the Battlemage set in Elden Ring