Keith over at Northlight Images points to a patent application that includes designs for superzooms so wide in range that they appear to be versions of the mythical lens that forum posters sometimes use as an example of unreasonable expectations.

A 33mm f/4 to 600mm f/7.2 lens might have previously been used as a tongue-in-cheek reference to an impossible design. Today, it is just one “embodiment” of a real patent application that also includes:

Another patent from a few days earlier shows a series of fixed aperture zooms: 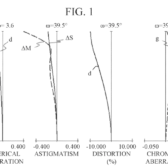 Hopes for L-quality image quality should be kept in check, though, especially with the thinner aperture embodiments.

The calculated aberration graphs included in the patents (example at left) show very significant distortion, and some detail-killing astigmatism and chromatic aberration.

The new patents show Shunji Iwamoto as the Canon inventor. Iwamoto has been responsible for many of the firm’s recent zoom lens patents, appearing to specialize in designs that involve moving elements.

The best Samsung smartphones of 2022