At least no chips were used up in Canon’s most recent product release: lacquerware lens hoods. Instead, they’re designed to hold chips. The Canon Japan swag is priced around the same price as Canon’s actual lens hoods, which says something about the markup on molded plastic. 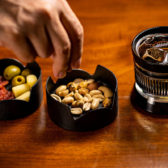 Only a few dozen pieces were created and some were still available yesterday, according to new.mynavi.jp, from the Canon Japan site. Searching the Japanese online store this morning, however, seems to indicate they are all sold out.

They weren’t designed to actually latch onto their respective lenses, but rather to set flat on a table. The hoods, when available, were priced between about $40 and $145 USD.

Overcast podcast app gets a gorgeous and much-needed redesign