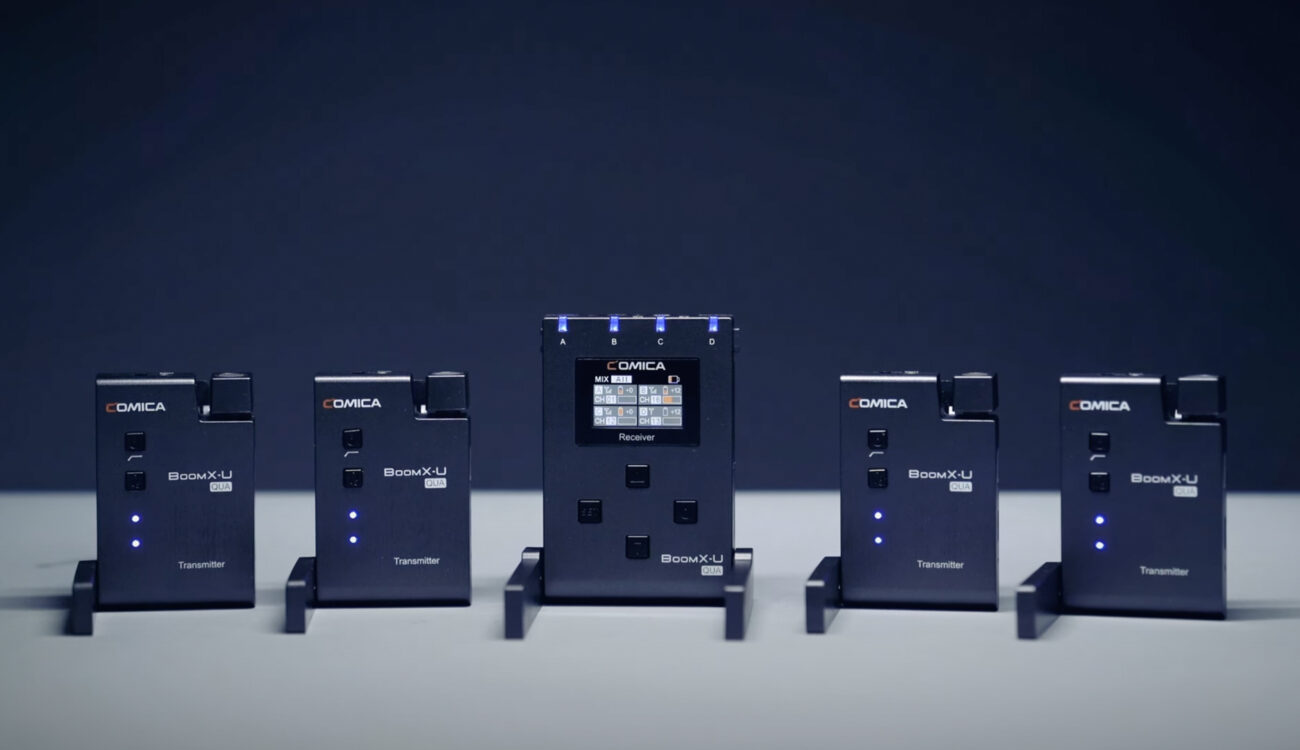 Chinese manufacturer COMICA has recently released a new version of its BoomX-U wireless microphone system: the BoomX-U QUA. This new version has one audio receiver and four transmitters that work simultaneously with a 120m/393ft transmission range. Let’s take a closer look at it!

COMICA is back with a new version of their BoomX-U series of UHF wireless microphone systems that we reviewed. The previous version had one receiver and two transmitters, which – most of the time – is enough. However, if you need to cover large meetings or shoot YouTube content with multiple people speaking, the new COMICA BoomX-U QUA might make your life easier.

The COMICA BoomX-U QUA is a mini UHF microphone system that consists of one receiver and four transmitters. The transmitters and receiver are lightweight at only 45g/1.58oz and 90g/3.17oz, respectively.

All units feature a built-in battery with a battery life of up to 6.5 hours, according to the manufacturer. In addition, you’ll find a USB Type-C port at the bottom of the receiver and a USB Type-C port on the right side of the transmitters, to charge them.

The receiver has two foldable antennas, and the maximum transmission range is 120m/393ft. At the front of the receiver, you’ll find a color LCD screen that shows you the status of each transmitter as well as basic information. There are four little LED lights (A/B/C/D) at the receiver’s top, indicating if the transmitters are linked to the receiver.

At the back of the receiver, you’ll find a cold shoe mount with a 1/4″-20 mounting point to mount it on top of your camera or audio recorder. You can also remove the cold shoe mount and use it as a belt clip to put the receiver inside your audio bag, for example.

The transmitters are a little bit more straightforward. All transmitters have a foldable antenna, a built-in omnidirectional microphone, and a 3.5mm TRS microphone input. In front of the units, you’ll find a low-cut/power button and a mute button.

The kit comes with four lavalier microphones. The lavalier mics have a “special anti-loose design” to prevent unwanted disconnection. I would have preferred a standard 3.5mm TRS locking connector.

The COMICA BoomX-U QUA is available now for $359. In the box, you’ll find a soft case, the microphone set with four lavalier microphones and windscreens, and all the cables/mounting accessories.

What do you think about this new UHF wireless microphone system? Do you often record more than two people simultaneously? Don’t hesitate to let us know in the comments down below!