Realme GT Neo3 pops up on Geekbench with 12GB RAM


The Realme GT Neo3 coming in the second half of 2022 has appeared on Geekbench already with its key specs. The GT Neo3 is said to have two versions – RMX3560 and RMX3562. And it’s the latter that’s passed through Geekbench.

The RMX3562 is running Android 12 (likely with Realme UI 3.0 on top), has 12GB RAM, and is powered by an octa-core CPU with four cores clocked at up to 2GHz, and four cores going up to 2.85GHz. That’s the Dimensity 8100 SoC announced earlier this week. 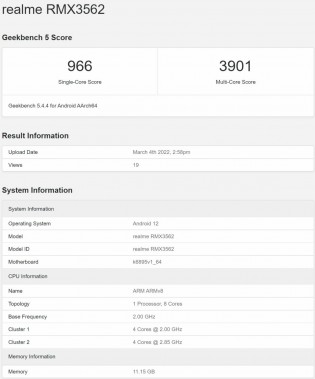 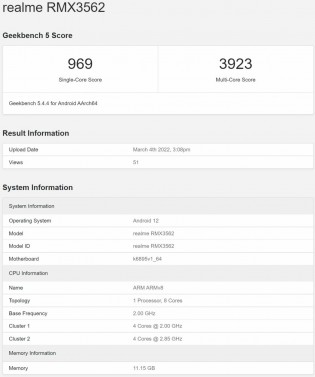 Realme has already confirmed that the GT Neo3 will be powered by the Dimensity 8100 SoC, and it will pack a battery that will charge at up to 150W.

The young brand hasn’t divulged anything else about the GT Neo3, but thanks to TENAA, we know the smartphone will come with a 6.7″ FullHD+ AMOLED screen with a fingerprint reader underneath, a 16MP selfie camera, and a triple camera on the rear consisting of 50MP, 8MP, and 2MP units.

The RMX3560 is also rumored to have the Snapdragon 888 SoC under the hood. However, that information isn’t corroborated yet since this model hasn’t appeared on Geekbench or AnTuTu.