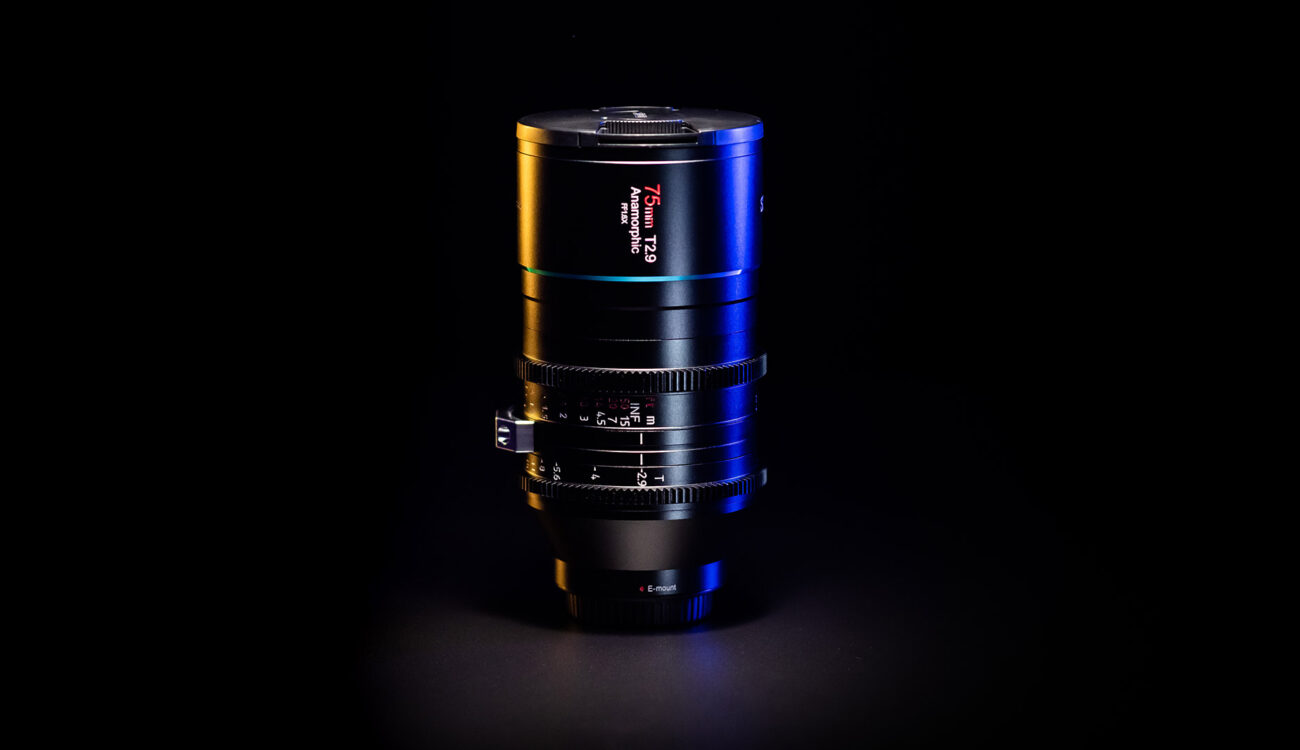 The Chinese company SIRUI is expanding their full-frame anamorphic lens lineup by introducing the SIRUI 75mm T2.9 1.6x. Perfect if you are looking to give your portraits and close-ups a subtle anamorphic look, the lens will come in RF, L, E, and Z-mount options. It will be available for purchase on Indiegogo starting April 1st at the super early bird price of $1199.

After breaking the market with their affordable APS-C anamorphic lens lineup, the company stepped into the full-frame anamorphic world by releasing their SIRUI 50mm T2.9 1.6x in September 2021. Here at CineD, we talked extensively about this product. My colleague Johnnie and I took the lens out for a spin with the Panasonic LUMIX BS1H and the RED KOMODO 6K respectively. You don’t want to miss out on our reviews!

Being an owner of this 50mm lens, I’ve been impatiently waiting for the next release. I personally was expecting SIRUI to launch the 35mm first, as they did with their APS-C lineup. Instead, the manufacturer announced that the 50mm lens needs a bigger brother first. In fact, the Indiegogo campaign for the new SIRUI 75mm T2.9 1.6x full-frame anamorphic lens will go live on April 1st, 2022. Let’s take a closer look.

Being a 1.6x anamorphic lens, this new entry offers the vertical FOV of a 75mm, while behaving like a 46mm horizontally. This squeeze factor will result in 2.4:1 aspect ratio images when using a 3:2 sensor mode. If you want to achieve an even wider 2.8:1 frame, you need to set your sensor to a 16:9 mode.

Personally, I find this value to be the right balance between a too-shy 1.33x anamorphic look and a sometimes too-extreme 2x distortion.

The 75mm shares the same mount options as the 50mm. In fact, the lens will be available in Canon RF, Leica L, Sony E, and Nikon Z-Mount. This makes it a perfect companion for many popular mirrorless and cinema camera models, including the Sony FX6, the Panasonic S1H, the newborn Canon R5 C, and the RED KOMODO 6K.

The second member of this growing full-frame family also shares many physical characteristics with its 50mm sibling. Both lenses feature a solid aluminum construction that feels sturdy, but still lightweight in the hands. To give you a clue, the Sony E-Mount version weighs 1373g: a little beefier than its predecessor.

The lens can be provided additional support via its 1/4”-20 threaded hole at the bottom. Moreover, an 82mm filter thread at the front can accommodate circular filters.

The cinematic housing features geared focus (95.5° rotation) and step-less aperture rings with a well-thought design. In fact, they can be found in the exact same position as those of the 50mm, thus making any lens switch on the field much faster and easier.

15 elements divided into 13 groups form the optical design of this lens. According to SIRUI, the 10-blade aperture should provide a smooth, silky bokeh.

The manufacturer claims this lens is 8K-ready. That’s not hard to believe, considering the good amount of sharpness of the 50mm full-frame version as well as of the full APS-C lineup. It would be interesting to see how it performs on Canon’s latest 8K beast, the R5 C.

Coming to the blue anamorphic flares, I expect this new model to produce similar results to the 50mm version. In my opinion, these can look a little too aggressive at times, but it ultimately comes down to personal preferences.

The close focus is 0.85m versus the 0.75m of the 50mm. As it’s often the case with this type of lens, you probably need to rely on a good set of diopters if you want to get really close to your subject.

Finally, if you’re curious to see how this new lens behaves, you can check out this sample footage video put together by SIRUI.

As it often happens with this company, before hitting the shelves the lens will first become available on Indiegogo. The campaign will go live on April 1st, 2022. SIRUI will offer a super early bird price of $1199, which represents a 20% off on the official retail price of $1499.

If you’re interested in adding this lens to your set, I recommend signing up for updates on the dedicated Indiegogo page. The first batch of perks usually sells out quickly, so you want to be among the first in line.

Do you already own the SIRUI 50mm T2.9x 1.6x full-frame anamorphic lens? Are you looking forward to start building your own lens set with the addition of this new 75mm anamorphic option? Share your experience in the comments below!

Apple Studio Display will work fine with your Windows PC