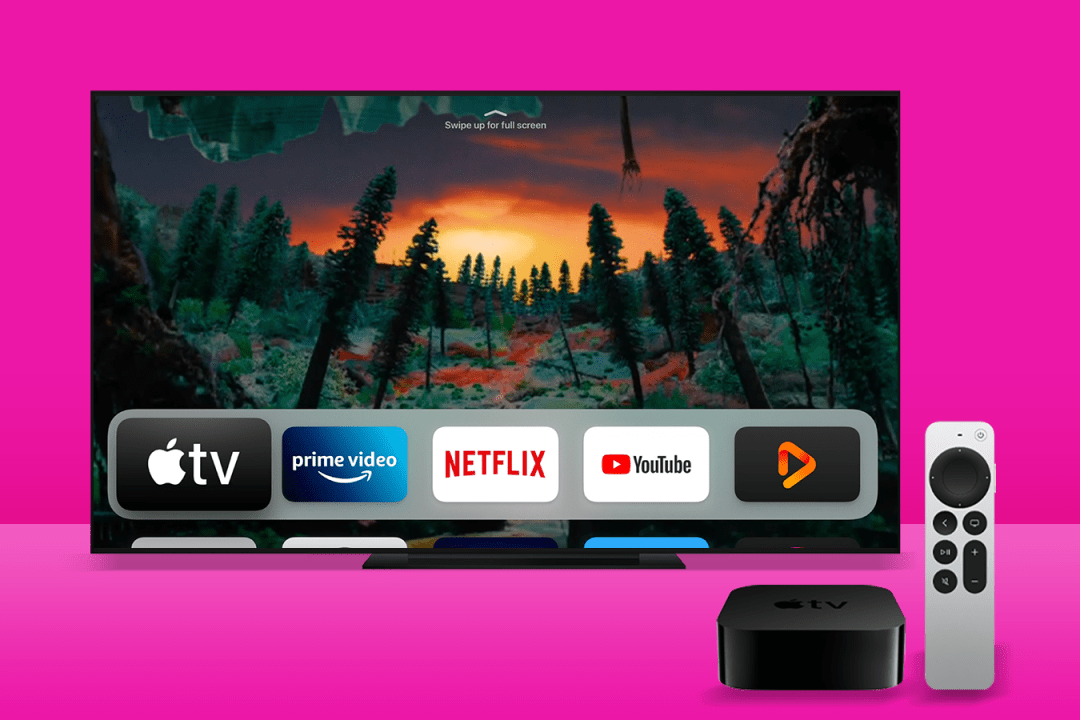 When revealing a new-gen Apple TV back in 2015, Apple CEO Tim Cook bullishly claimed the “future of television is apps”. Which is fine – but that was the present of television at the time, if you owned a smart TV or rival telly box. Yet Apple has always been different. Its smartphones and tablets have far more properly good apps than rival systems. Our hope was Apple’s future for the telly would at least involve some we actually wanted to use.

As it turns out, there’s a lot of junk to fish through on the Apple TV App Store, even if you’re rocking the latest Apple TV 4K, and not that many apps you’d want to use for long. But there are exceptions – and those apps we’re still using (and liking) are listed here in this guide to the best Apple TV apps. Except for games – we’ve got a companion feature for that: The best games for the Apple TV.

(Note: all apps are universal, meaning they’ll also install on your mobile Apple devices too, unless otherwise stated.)

You know that breathing app on your Apple Watch? This one does much the same for your Apple TV, only in big-screen fashion so it takes over your entire field of view. Just the thing when you need to calm down after an exhilarating end-of-season finale. There are plenty of options too, from colours to breathing types.

“Thirty quid!” you might yell, while choking on your drink and following up with a choice expletive. But Reflection is something special – a version of Brian Eno’s latest album that never stops remixing itself, and that shifts and changes depending on the time of day, and even the season. On the telly, you also get an evolving Eno abstract painting, transforming your gogglebox into a slice of living art.

Very different from its iPhone counterpart, CARROT for Apple TV nonetheless augments forecasts and maps with plenty of snark. The malevolent AI dishes out twisted animations along with rainfall predictions. Multiple locations can be stored, and secret places await discovery; but whatever you do, don’t poke CARROT’s ocular sensor!

Given the rate of knots at which Disney is buying up properties, it’s surely only a matter of time before Disney+ is the only streaming telly service in existence. Until then, it’s fab for watching Marvel, Disney and a wealth of other shows on Star. There’s a fancy ‘watch with chums’ feature too.

There’s something magical about seeing the Earth from above, and Earthlapse offers some stunning time-lapse photography. There are 18 carefully mastered views from the ISS to choose from, and you can muck about with speed, colour filters and the soundtrack as you gawk at our little blue planet zooming through space.

If you dump all your media on a drive and want to access it from any device, you need FE File Explorer Pro TV. It connects to local network shares and remote servers, whereupon you can stream movies and audio files, or rifle through your photos. Not sure if it’s right for you? Try the free version before plonking down your cash.

If your digital video collection is mostly knocking around hard drives or dotted about cloud services, Infuse deals with all that. Whether you grab the free or paid version, you can stream to your Apple TV, re-encoding files on-the-fly as necessary. Artwork, catalogue sorting and metadata is all automatic, making for a gorgeous browsing experience. Pro users also get trakt.tv support, syncing viewing progress across devices.

This app provides an efficient, usable way to feast your eyes on upcoming films. Click a piece of cover art and you get an overview of the flick in question, along with access to current trailers. Interesting movies can be squirrelled away into a favourites list. It’s a must-download, unless you hate movies (in which case, buying an Apple TV was a strange decision on your part).

Not sure what to watch? Or keen on watching something specific, but not sure where to watch it? JustWatch can help. It does a better job than Apple’s TV app of digging into a range of sources, and it also makes recommendations to feed your viewing habits, along with letting you build a service-agnostic wish list.

One of our favourite cookery apps, Kitchen Stories is awash with gorgeous photography and tons of video. Unsurprisingly, Apple TV concentrates on the latter, with a selection of videos covering recipes and skills. If you’ve always wanted to know how to prepare a squid, make a hearty beef stew, or chop (rather than just eat) chocolate, this is the app for you.

A social networking app on Apple TV might strike you as odd, but Letterboxd is all about telly – or, more accurately, films on your telly. You log and rate favourites, flag films you’d like to see, peruse trailers, and optionally gripe to everyone about how unfair it is that new Star Wars flicks aren’t identical to the one you’ve had in your head since 1983.

Obsessed with daylight? A secret vampire who’ll only head out after dark? Then get Lumy on your telly, to help you track all the relevant data. There’s even a photo frame mode on Apple TV, transforming the progress of the sun and moon into a minimal slice of virtual art.

With Netflix having infiltrated pretty much everything with a screen, we’re half surprised it doesn’t appear on our Apple Watch – or our living room’s thermostat. The Apple TV version’s much as you’d expect: a usable, reliable way to delve into tons of great telly like Stranger Things – before realising with a start you’ve not actually moved from the sofa in three days.

If you’re a fan of stargazing, but not of going outside, you can always peer at virtual heavens using an astronomy app on your phone. But if even that seems like too much effort, fire up Night Sky on your Apple TV. Using the Siri Remote, you can zip about constellations. For more dedicated buffs, there’s a Tonight Tour that provides information about what will appear in the sky – and when.

Although Infuse is in our list, it would be wrong to omit another video favourite, PLEX. The app appeared way back in unofficial form on jailbroken second-generation Apple TVs, but this is the real deal. Despite being built in just five weeks, PLEX for Apple TV started out as a first-rate app for organising and streaming media collections, along with finding new things to watch; it’s carried on being great ever since.

The ‘Radio’ app on the old Apple TV was dreadful, hence why we’re relieved to find Radio – Receiver. It all looks very sleek and swish – dare we say it, a bit Apple-like. You can search for stations, add them to your favourites, and then dance around the living room like a lunatic. The app also supports podcasts, for when you want Infinite Monkey Cage or Adam Buxton booming out of your telly.

On iOS, Solar Walk 2 is a gorgeous educational tool for exploring the solar system. On Apple TV, it’s simplified, having you select a planet or moon from a menu, and then fiddle around with Siri Remote to spin it about. However, you can still crack Saturn and co. open like eggs to peer at their insides, along with bringing up infographics to discover how insignificant Earth is compared to the giants of the solar system.

If you work for an ISP, you might be gnashing your teeth on seeing this entry, and so, yes, we know speed-test apps aren’t entirely accurate. However, if your Apple TV is having trouble streaming your favourite shows, Speedtest by Ookla at least provides an indication of whether your broadband’s conked out or not. Naturally, it’s dead easy to use: let it rip and within a minute or so you’ll get current ping, download and uploads speed estimates.

Apple Arcade aside, games aren’t exactly flying on to Apple TV. Still, you can use Apple’s black box for your Steam collection instead, streaming from a networked PC or Mac. Caveat time: controller set-up can be a faff, and you need very good connectivity to avoid stop-motion syndrome. But when it’s properly up and running, Stream Link’s a blast.

The ethos behind the Streaks apps is habit-forming and simplicity. With Streaks Workout, you only need your Apple TV, a floor, and at least some desire to get fit. You choose exercises you’re happy with, how long you want to sweat for, and then get going. The app tracks your streaks, encouraging you to continue burning off excess flab that ‘somehow’ appeared due to you spending too much time parked in front of your Apple TV doing less strenuous things.

The idea of using maps on your telly probably seems a bit odd. After all, you’re unlikely to have your flatscreen and Apple TV while zooming up the M1, a massive extension lead trailing from your car. But this is a decent app for exploring, not least when using Apple’s flyover feature, which gives you a 3D view of famous landmarks — even if they sometimes look like a 15-year-old PC game has melted a bit.

If you’ve been watching vacuous telly to the point your brain’s threatening to throttle your windpipe, just to end it all, check out TED. You’ll find thousands of free videos that feature smart people talking about interesting things. You can search by type, look for something specific, and stash favourites to later impress your friends that thought you only watched The Big Bang Theory on a loop.

If you can’t relax without background noise, but don’t want it to be permanently angry ‘Landahners’ in EastEnders, or whatever Spotify serves up, get White Noise on your telly. You choose from audio loops, including gentle beach waves, a tick-tocking grandfather clock, and, er, a vacuum cleaner. Probably just clean the house if that last one’s your thing.