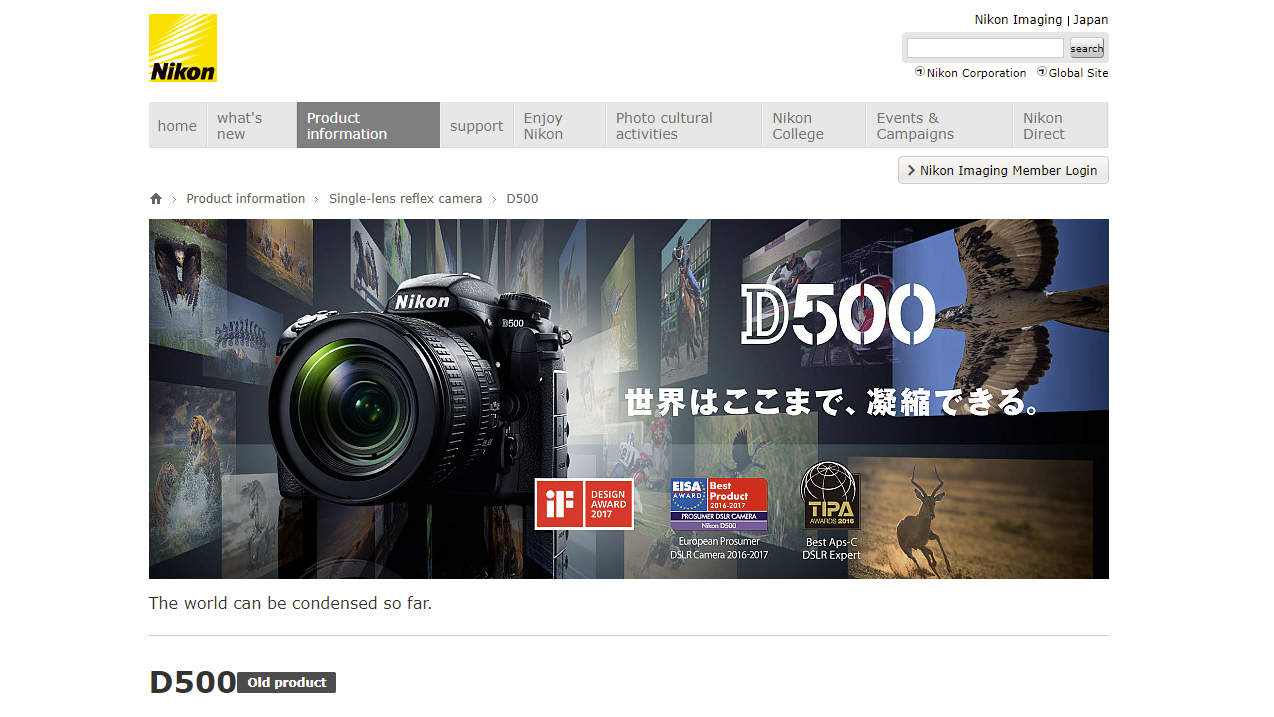 Well, it looks like it’s true. The Nikon D500 is officially discontinued. After it was spotted as being out of stock, on backorder or whatever, with Nikon Singapore even having “discontinued” in the URL of their page for the Nikon D500, there hadn’t yet been any word from Nikon HQ in Japan. Now, though, it’s actually listed as discontinued on the main Nikon Japan website.

It shouldn’t really come as much of a surprise. The Nikon D5, with which the D500 was launched in 2016, was discontinued when the Nikon D6 was released in 2020. We didn’t see a D500 replacement at the same time then and it seemed unlikely that we ever would. What is perhaps surprising, though, is that they’ve killed it off before announcing a mirrorless successor – or even the development of one.

This can only really mean one of two things. Either Nikon isn’t planning to continue the pro model APS-C line at all and we’ll never see a true D500 replacement or they are and we will. But even if it’s the latter, that then gets split again. Either it’s being killed off now because Nikon’s planning to announce a successor soon (which would seem logical) or they’re going to announce it eventually. One day. Probably in the distant future. This last one is probably at least as likely (if not more so) than the other two given Nikon’s history.

After how long it took for Nikon to release the D500 (2016) after the D300s (2009), entirely skipping the D400, it wouldn’t surprise me if we don’t see a legit D500 mirrorless replacement until 2024 or later. In fact, it’d probably surprise me more if they did go for option 2 and actually announce a mirrorless D500 successor at some point in 2022. I mean, Canon discontinued the 7D Mark II (2014) ages ago and we’re still waiting to see a mirrorless successor to that one. And you know that anything Canon does, Nikon will follow suit eventually. Maybe this is just the high-end APS-C camera’s time to die? At least as far as Nikon and Canon are concerned.

It is a big gaping hole in Nikon’s lineup at the moment, though. The Nikon Z50 and Z fc aren’t even close to the D500 in many respects. In fact, it doesn’t even stand up to the D7500 in a lot of ways, either. I mean, they don’t even have a remote shutter cable socket for a start – which many D500 shooters (particularly wildlife) regularly utilise to minimise the risk of knocking their camera on its tripod while taking a shot of a relatively static scene with a long lens. Those two cameras also don’t have anywhere near the tank-like build quality of Nikon’s pro model APS-C DSLRs, either.

So, there really is nothing to replace them in the Nikon lineup without stepping up to full-frame and paying a lot more money. I’ve already seen quite a number of photographers switch to companies like Fuji or Sony for their APS-C needs over the last few years (switching from both Nikon and Canon) as the larger sensor of full-frame bodies doesn’t really offer them any benefit vs body-specific features. And when one factors in the cost of switching up an entire system from APS-C to full-frame while keeping that speed and feature set, staying with Nikon might be the least financially sensible option.

I don’t think that the D500 being discontinued is necessarily a bad thing. But why haven’t they at least announced the development of a replacement model? I really do hope this means that Nikon is getting ready to announce a mirrorless D500 replacement soon. It might just convince me to finally jump on the Nikon Z system if they do it right. Because right now, with a dozen Nikon DSLRs sitting on the shelf next to me that I’ve picked up over the last couple of decades and no obvious Nikon upgrade path in sight from Nikon, it’s not looking likely.

Who Really Puts Instax Film in Their Mouth?